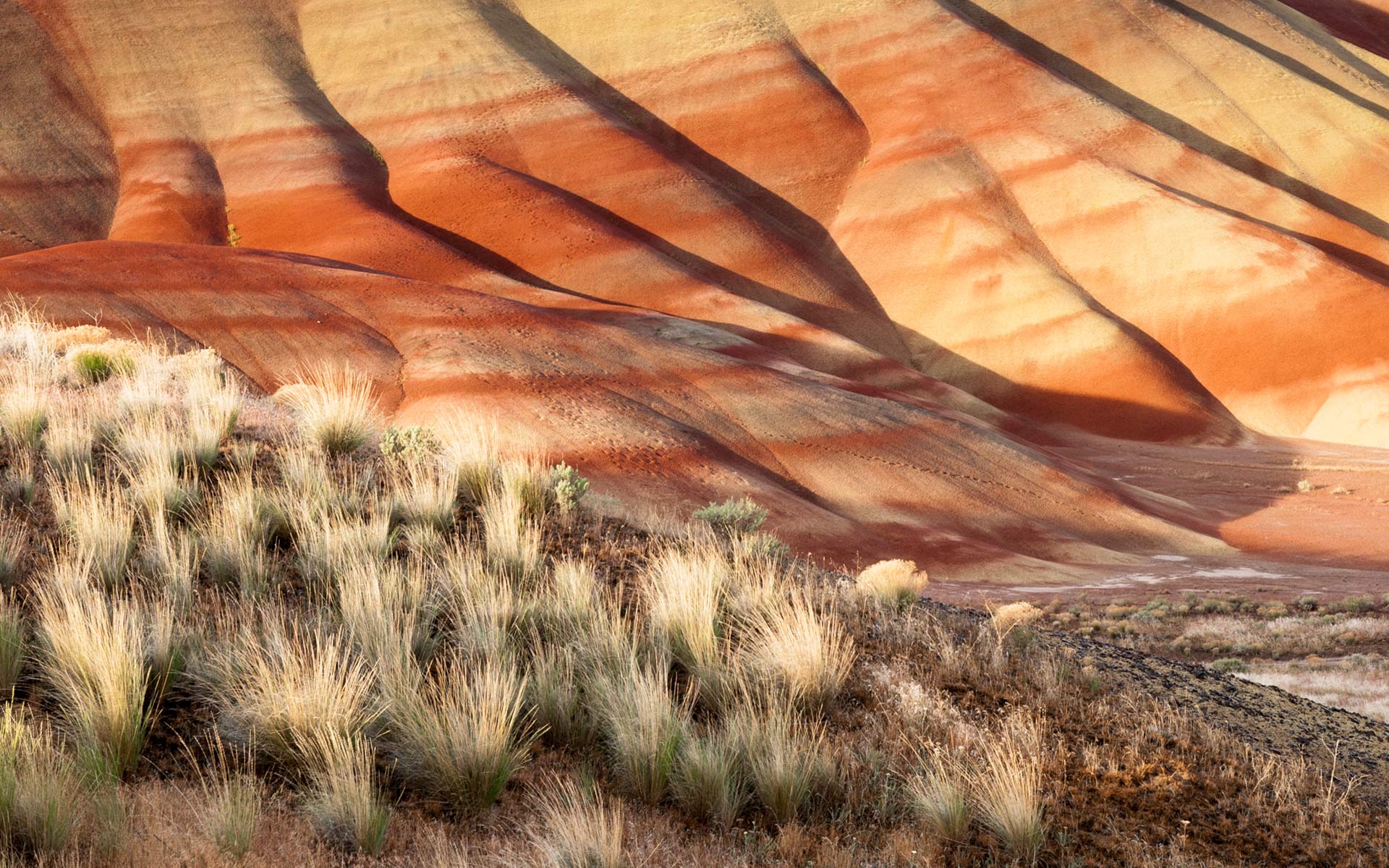 John Day Fossil Beds NM, located northeast Oregon, within the John Day River, is known for its well-preserved layers of fossil plants and mammals that lived in the region between 44-7 million years ago. The monument consists of three geographically separate units:

Entrance to the park and its visitor center, museums, and exhibits is free, and trails, overlooks, and picnic sites at all three units are open during daylight hours year-round. No food, lodging, or fuel is available at the park, and camping is not allowed. However, lodging, groceries, gasoline, campsites, and other amenities are available elsewhere in the region.

The Sheep Rock Unit has eight trails ranging in length from 300 feet (91 m) at the Mascall Formation Overlook to 3 miles (4.8 km) at Blue Basin. Four trails of a quarter-mile to 1.5 miles (2.4 km) long cross parts of the Painted Hills Unit. At the Clarno Unit, three separate quarter-mile trails begin at a parking lot along Oregon Route 218, below the face of the Clarno Palisades. Visitors are asked to stay on the trails and off bare rock and hardpan to avoid damage to fossils and fragile soils.

A trip to this remote area of Oregon is absolutely worth it! Plan at least 1 day for each of these three units and its surroundings.

The little town of Mitchell should be your base camp to explore and photograph in the John Day Fossil Beds National Monument. Mitchell is according to Tom Fitzgerald, a lifelong resident of the area, ” … a small town populated with a singularly independent breed fro whom conformity is a virtue only in one’s neighbor”.

Mitchell is the only town in the entire area that has the commodity of a gas station, a general store, a dining place, a hotel and a little patch of lawn where you can pitch up your tent after checking it with the owner of the Oregon Hotel. However, if you prefer to rest in a bed overnight I strongly recommend to stay at the hotel.

Coming from Portland – Coming from Portland – Start your trip taking I-84 heading east and drive along the south side of the Columbia River Gorge until the city The Dalles. The trip now continues south on highway 197 for approximately 63 miles when you turn left on highway 96 for another 12 miles until you arrive in the ghost town Shaniko which was once Sheep Transfer Capital of Shaniko. Here you can make a stop and photograph the numerous buildings such as the Jail, City Hall, that is a small replica of the White House, the Fire Stations, the Outhouses, the beautiful brick facade of the Hotel (now closed) and the old barn that houses many old wagons. Your trip now continues on highway 218 heading towards Antelope and another 20 miles until you pass Clarno Unit. Sixteen miles later you will enter the little charming town of Fossils. Take route 19 which merges later on into 207 and you will finally arrive in Mitchell after another 46 miles.

Coming from Ontario – Ontario, bordering Idaho, is east’s gateway to Oregon. It is a simple but long stretch from Ontario to Mitchell. Take highway 26 and drive 238 miles until you are in Mitchell.

Coming from Eugene – From Eugene to Mitchell it is a straight shot following highway 126 all the way and passing by the little towns of Vida, Sisters, Redmond, and Prineville. The entire stretch are 188 miles.

Coming from Crater Lake – Exit Crater Lake National Park at the north entrance and urn right on highway 138. Fifteen miles later you will merge left onto highway 97 and drive 92 miles until you reach Redmond. You will now turn east an take highway 126 for another 66 miles to finally arrive in Mitchell.