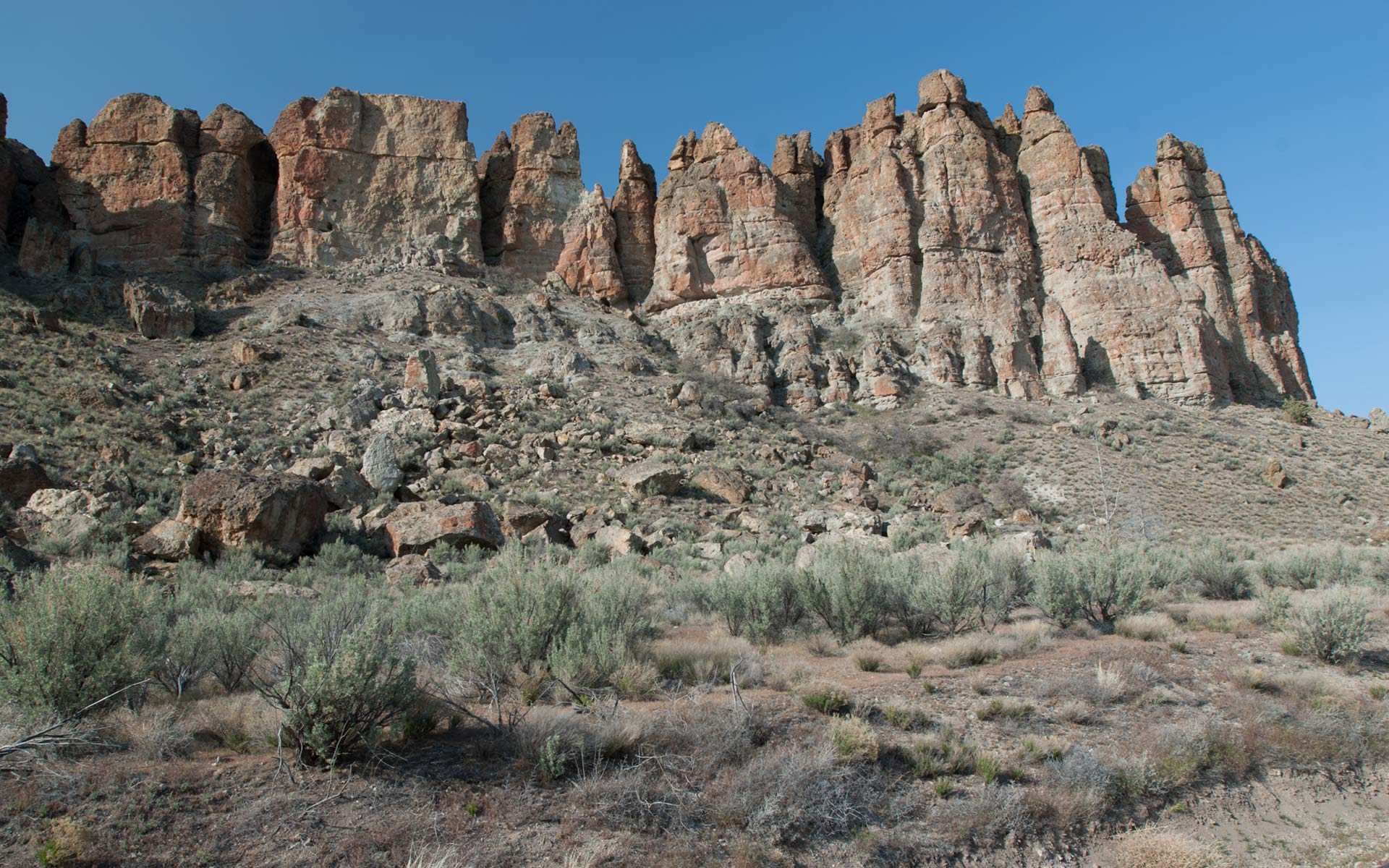 Of the three separate units of the John Day Fossil Beds NM, the Clarno Unit is the most out-of-the-way and the smallest. Sited just a few miles east of Clarno – basically just a bridge over the John Day River and a community center – this unit centers around a cliff, named “The Palisades”, which towers above OR 218. The rock is rich in fossils – leaves and branches mostly – which have been exposed in the boulders that have dropped off from the cliffs above. The fossils originated in a subtropical forest some 44 million years ago which was trapped in an ancient mudflow. Two short trails lead up from the highway. The “Trail of the Fossils” does a short loop with exhibits along the way describing some the fossils found here. A second trail climbs higher into the rim rock face to a small ten-foot rock arch that has been scoured out by the elements.

Getting to Clarno Unit:

A detailed description of how getting to Clarno Unit can be found at the previous page under the topic “Getting There – Coming from Portland”. If you are coming from Portland anyway it might be worthwhile to plan visiting this site first given Clarno’s out-of-the-way. If your route to get to the John Day Fossil Beds National Monument is a different one it is better to plan first an overnight at Mitchell which should be your headquarters for this trip.

Below is a link to a map showing the route between Clarno and Mitchell in detail.

The Palisades are the most prounonced landmark of the Clarno Unit. A photographic approach to these spires during sunrise or sunset will provide a great atmosphere of this desert landscape. A perfect timing with the moon opposite to the sun might enhance the image even more. To find the perfect timing of such a composition I suggest to download a valuable software from www.photoephemeris.com as this tool gives you not only the right time for sunrise, sunset, moonrise, moonset, size of the moon, but also the exact angle which the sun and moon will present itself in the landscape.

You should include in your schedule enough time to take the “Trail fo the Fossils” to explore the fossils displayed in nature. Along this walking trail there is a timetable of exposed geologic history going as far back as 40 million years ago when the area was covered in thick jungle. The volcanic mud flow which covered the jungle and formed the Palisades preserved sycamore leaves and trees in their wake.