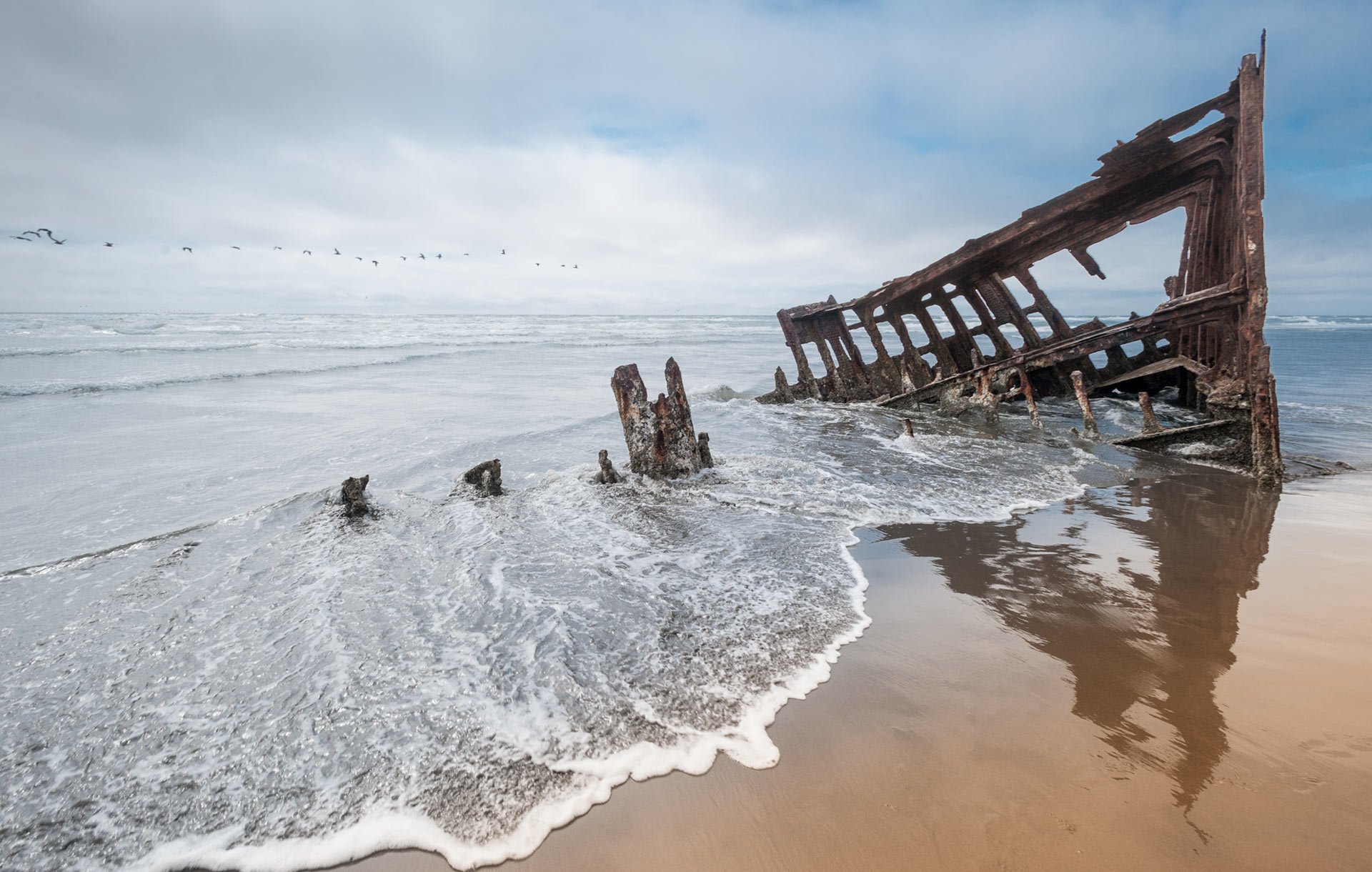 Sailing from Salina Cruz, Mexico on September 1906, The Peter Iredale was bound to Portland, Oregon. The journey up the coast was unremarkable until the night of October 25, when Captain H. Lawrence sighted the Tillamook Rock Lighthouse at 3:20 am. The crew altered course with the intent to enter the mouth of Columbia River in thick mist and rising tide. Under strong winds out of the west, an attempt was made to wear the ship away from shore, but a heavy northwest squall grounded the Peter Iredale on Clatsop Sands. High seas and wind drove the ship ashore.

There was little damage to the hull and plans were made to tow the ship back to sea, but after several weeks waiting for favorable weather and ocean conditions, the ship had listed to the right and become embedded in the sands. She was sold for scrap.

All that remains is the bow, a few ribs, and a couple of masts.

Captain Lawrence’s final toast to his ship was: “May God bless you, and may your bones bleach in the sands.

The wreckage is still visible, making it a popular tourist and photographic attraction as one of the most accessible shipwrecks of the Graveyard of the Pacific.

Getting to the Shipwreck Peter Iredale:

Follow the instructions provided at the map below. The journey is marked to start in the little and charming town of Astoria which is certainly also worth a visit.

A new dimension besides light needs to be taken into consideration. Before you get ready to go to Clatsop Beach and to the Peter Iredale shipwreck you also should look into the tide schedule to make sure that the wreck is not completely in the dry or flooded. Perfect timing is to have the tide at the level were the sea water comes and goes to provide some movement along the wreck.

A tripod might be necessary, specially if you plan to do long exposure to have a dynamic play of the water around the shipwreck. In this case it is recommended to have a wide base at each of the ends of the tripod to avoid them to sink in the wet sand. An easy and very practical way to do that is cut an ‘X’ on three tennis balls and insert each of them at the three ends of the tripod.