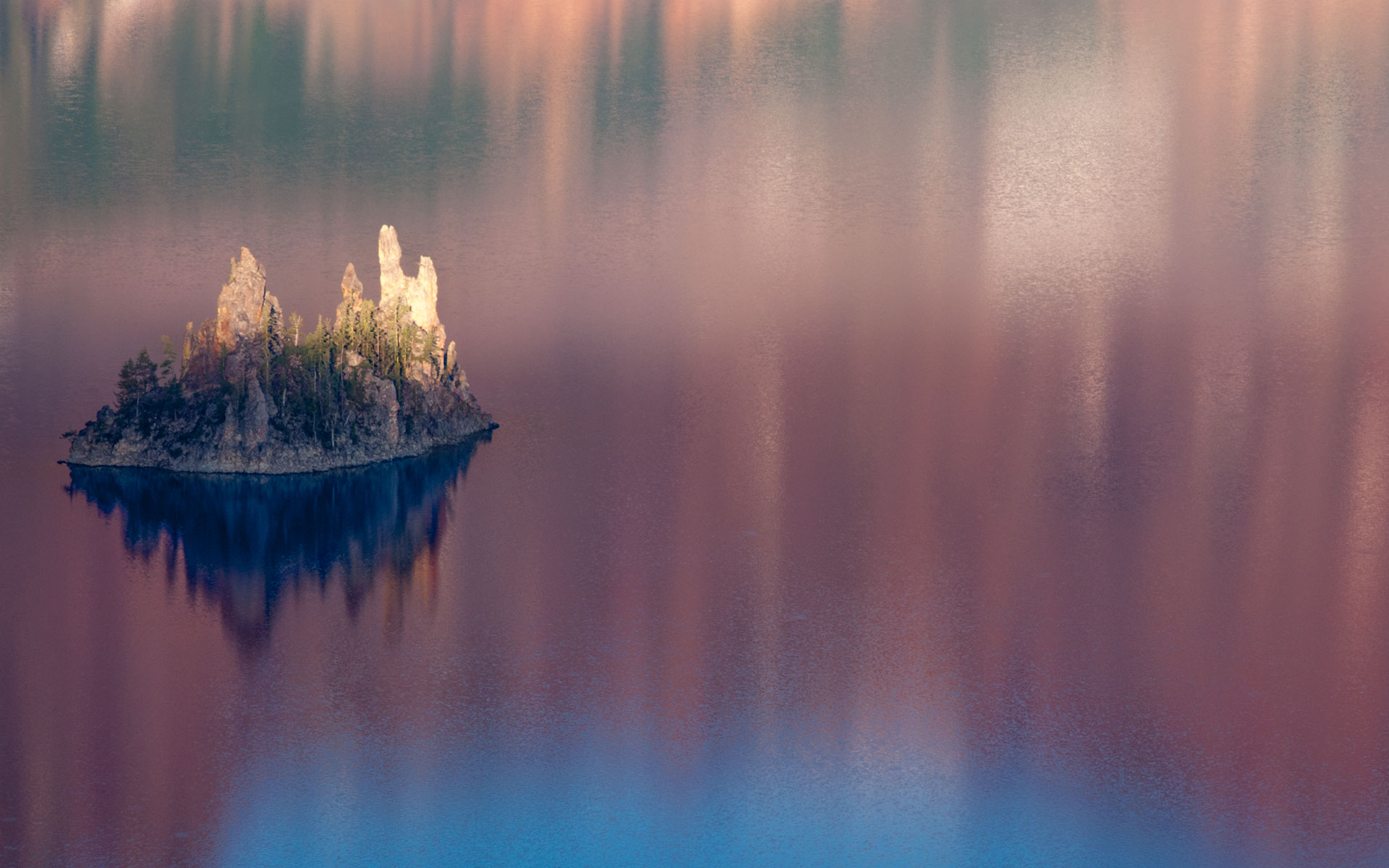 Crater Lake is an incredibly blue lake that is hard to describe. Seeing pictures of it before you go there will only make you think that it is fake but one you stand at the rim and look down there will be only one word going over your lips: WOW!!!

The deep blue of the lake is due to its purity and deepness. The blue color changes with the angle of the sun and the shallowness of the water.

Crater Lake is actually not a crater but a caldera. Ome seven thousand years ago Mount Mazama erupted and blew off its top and then collapsed, creating a big round pool. There are no outlets from ths pool, so it simply filled up with rain water and snow until it reached a state of equilibrium between new rain, snow and evaporation of water from the lake.

Crater Lake is the deepest lake in the US and the seventh deepest in the world (1,932 ft, 589 m)> It ois about six miles across (9.5 km). The steep slopes of the caldera make access to the lake almost impossible. The only trail down from the rim to the water is at Cleetwood Cove.

Getting to Crater Lake:

There are two main routes to Crater Lake from Interstate 5: Route 62 (the Crater Lake Highway) and Route 138 (the Umpqua Highway). There are several other ways to reach Crater Lake if you are coming from the north (bend, Oregon) or the south (Klmath Falls), but most probably you will be taking the Interstate route. Winter or early and late in the season, you should take Route 138, since only the south entrance is open. However, during summer Route 138 is very crowded. Not necessarilly with people going to Crater Lake, but just enjoying the recreational activities in the Rogue River National Forest.

Route 138, the Umpqua Highway, would be the choice if you are planning a midwinter snowmobile trip to the Rim of Crater Lake out of Diamnond Lake. It is also crowded during summer, but there are so many wonderful waterfalls to photograph along this road, that you will not mind spending the time.

You might want to consider taking one route to Crater Lake and then returning by the other. I f you are a camper, there are plenty of campground along either route. The national forest camps are close enough to serve as a base for excursions to Crater Lake.

There are only two seasons at Crater Lake – summer and winter. Sometimes it is difficult to know where one begins and the other leaves off. It can snow any time of the year. But you sure know when it is winter – Crater Lake gets a sectacular amount of snow averaging 44 feet every year.

Summer – The most popular time to visit is July and August when the weather is at its best. You want a clear sunny day for good photos of this deep blue lake. Wildflowers are best from late July to early August, though there are plenty of early and later flowers blooming throughout the summer. Spring is merely snow removal time and snow removal starts in the area around Rim Village in late April or May. The eastern side of the Rim Drive and the North Entrance are the last to open (sometimes into late June).

Winter – Winter comes to Crater Lake swiftly with fierce storms and white-out conditions. Winter at Crater Lake runs roughly from October through May. Fifty feet snow can fall during a typical winter with accumulations of around 10 feet. The only road kept open is from the south entrance to the Rim Village. If you arrive in winter and want to stick close to your car, this is the only view you can photograph of Crater Lake. However, even a single viewpoint of that beautiful deep blue lake set off against white snow is stunning.

Snowmobiles are only allowed along the unplowed road from the north entrance to the north rim of the lake. Snowmobile trips usually originate from Diamond Lake to the north of Crater Lake.

If you are a cross-country skier and a backpacking winter camper, Crater Lake is a magnificient destination. Really ambitious (and very experienced at winter travel) photographers can make the three-day cross country skiing trek around the lake. Most cross-country skiing and snowshoe hikes are done from rhe Rim Village to the Watchman.

There are no accommodations at Crater Lake during winter. Nor is there any place where you can purchase gas. However, some limited services are available such as the cafeteria.

From Rim Village you will want to drive the route clockwise. You can’t do it the other way – the east side of the drive is one way from Cleetwood Cove to the headquarters south of Rim Village in the clockwise direction. There are some fifty places to stop along the Rim Drive. Only someone recording every lake view will want to stop at all of them. This tour covers some of the more prominent stops from enough vantage points so you can decide if the next stop down the road might afford a better view.

Rim Village to Union Peak – The first major stop you will pass is Discovery Point (about a mile beyond the village), so named because this is where John Wesley Hillman first saw the lake. If you prefer, you might want to walk the 2.8-mile Rim Trail to photograph this section of the lake. The hike between Discovery Point and the Rim Village is about 1.5 miles.

From Discovery Point to the Union Peak stop the road passes open meadows that are excellent places for wildflower photography during summer. Depending on when you pass through you will see alpine phlox, blue lupine, arnica, skyrocket, coneflower and host of other flowers.

Wizard Island – this is one of the best overlooks because Wizard Island is in the foreground. It is an excellent choice for sunrise and sunset. During midday you will discover many shades of blue depending on the depth of water. Around Wizard Island, the lake is shallow.

The Watchman – Just before the Wizard Island Overlooks is the trailhead to The Watchman. The moderately steep 0.8 mile trail leads to a fire-tower. The trail may be blocked by snow until late summer. Artistically twisted pines can be used in your compositions of the lake scenes. Excellent view directly above Wizard Island some 400 feet higher than the Rim Drive.

Mount Thielson – From the Wizard Island Overlook past the Mount Thielsen View there are more good areas for wildflowers, especially those that drive in poor soil. Pasque flowers bloom in July and other interesting plats you may see include erigonum and newberry knowtweed.

North Junction – The road that forks to the left takes you through the Pumice Desert and to Route 138. If you are entering the park from the north, this will be your first view of the lake. Llao Rock is to your left.

Llao Rock and Steel Bay – The road moves away from the lake and climbs over the back side of Llao Rock. From Steel Bay overlook The Watchman and Wizard Island are to your right and Pumice Point, Mount Scott and Cloudclap frame the left side of the view. The Llao Rock pullover affords a magnificent view of this large 1,200-foot-high cliff framed by trees.

Cleetwood Cove – A large parking area marks the only place along the entire rim where you can walk down the lake. A very steep trail leads down to the shore and the boat that will take you on a tour of the lake and to Wizard Island. Whether you take a boat tour or just want to stroll down to the lake, remember it is a very steep in elevation of about 700 feet. A short walk down the trail will provide you with some nice views of the lake framed by fir trees. however, if you are not going to take the boat ride, any more than just a short stroll is nit necessary. Trees close in this trail and only occasional openings provide vistas of the lake. The trail is usually open by mid-July and closes with the first snow storm in late September or early October.

Skell Head – This stop provides you with an excellent view from the west side of the lake. An early morning stop will bring out the best shades of blue.

Cloudclap – A side road leaves the main road toward the rim to a high vantage point (1,690 feet) above the lake. This is another good morning view with Dutton Cliff, Applegate and Garfield framing the left side and Wizard, The Watchman and Llao Rock on the right. Pines, twisted by wind and weather, on the rim make good framing trees for views of the lake.

Trail to Mount Scott – The 2.5-mile hike to the top of Mount Scott is probably the best overall view of the lake. At 8,926 feet Mount Scott is the highest advantage point in the park. Start as early as possible since the best lightning for deep blue water is best in the morning. It will take about an hour-and-a-half to reach the summit if you are a steady hiker. The elevation gain is about 1,126 feet from the trail head. Those not used to the high elevation may end up huffing and puffing and stopping frequently to admire the view. Give it a try and allow lots of time. This is the most spectacular view.

Kerr Noth – Kerr Notch is a glacier valley and closer to the lake than most viewpoints with an excellent view of a 300-foot rock island called the Phantom Ship. Although morning shots have the best color, this structure is interesting in the afternoon as well. The sun in the western sky reflects off the surface of the lake, giving an eerie feeling to the Phantom Ship. Nearby firs and pines can be used to frame views of the Phantom Ship and lake.

Road to Pinnacles – Just after Kerr Notch a road cuts off to the left to the Pinnacles. This six-mil long road ends at some interesting pumice spires that have been carved by the elements. Some of these spires are 100 feet high.

Sun Notch – Sun Notch is another glacier valley with a good view of the Phantom Ship. You will take a moderate quarter-mile trail through meadows of wildflowers to the rim’s edge, right above the Phantom Ship.

Vidaes Falls – Between Sun Notch and Vidaes Falls melting snow cascades down Vidae Ridge providing a lush environment for flowers that thrive in a moist environment. Here you will find bog orchid, bleeding heart, aster, columbine, Indian paintbrush, and monkeyflower each in its season. Vidae Falls is a 100-foot cascade with a thriving wildflower population on the north side of the road.

Castle Crest – The Castle Crest Wildflower Trail is another must-stop. It is a half-mile loop that passe through a forest to a lush meadow filled with wildflowers including corn lily, larkspur, shooting star, monkeyflower, monkshood, and violet each also in its won season. From the wet meadow the trail leads to a drier, sunny area where you are likely to find Indian paintbrush, penstemon, and phlox, and skyrocket gilia. Late July and early August are the best time but you will find plenty of wildflowers throughout the summer season.

Disclosure: Most of the text above is an exert out of “Photo Traveler’s Guide to … Oregon”. The full hard copy version can be purchased here.